Welcome to a new installment of AppWorks tips.

By now (if you followed the posts on this blog), you all know how to call webservices (internally/externally) from a BPM perspective. These posts show you the happy case scenarios where the webservice is always up and running, but there will be a time when that same webservice starts to fail for any reason!? But my dear “AppWorks guy”…That’s why we deploy these services on multi-tenant SaaS cloud platforms, so they are always available!? Right??…Sure, keep believing in such mentality until it’s your turn on disaster recovery! 😟

Let get right into it…

Time to bring an (external) service up and running! With “external”, I mean just outside our AppWorks VM and in my case locally on my Windows laptop. For exposing a service we have posts available on this blog website, but I saw a new way passing by during my daily job…Let’s introduce the standalone version to WireMock.

The startup will create two new folders next to the downloaded JAR file:

Now open browser and go to URL http://localhost:8080/__admin/ and have a response like this: 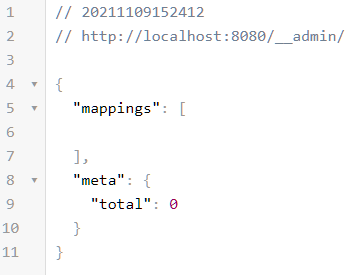 Time to add our first ReST endpoint via a POST command:

A refresh of the admin URL gives some more feedback: 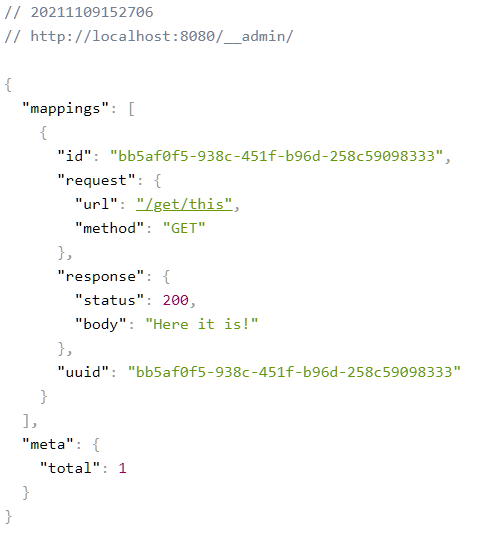 Now we can also do a GET request like this: curl http://localhost:8080/get/this or open the URL from the browser. NICEEEE stuff…WireMock! 😘

We save this file off-course in the created ‘mapping’ folder. After save, we can start WireMock again and have a GET request via URL:
curl http://localhost:8080/api/mytest

The advantage of this last file is the persistent availability of the end-point. The earlier POST request (to create a new end-point) is only saved ‘In memory’.

So, let your mind spin around and see what you can product on all the nicest dummy ReST responses via WireMock!

Call ReST from within AppWorks

When we have it up and running let’s also have a quick test on the worst-case scenario…Time for a shutdown on the external webservice and have a test call again…You get a response like this:

A valid response we also expected, but what if this scenario happens in a BPM?

For this we first require a BPM. We create a new document of type ‘Business Process Model’ nicely saved in the ‘bpms’ folder of the project with the even nicer name ‘bpm_test’. Use this screenshot as a start where we insert our webservice operation into the activity: 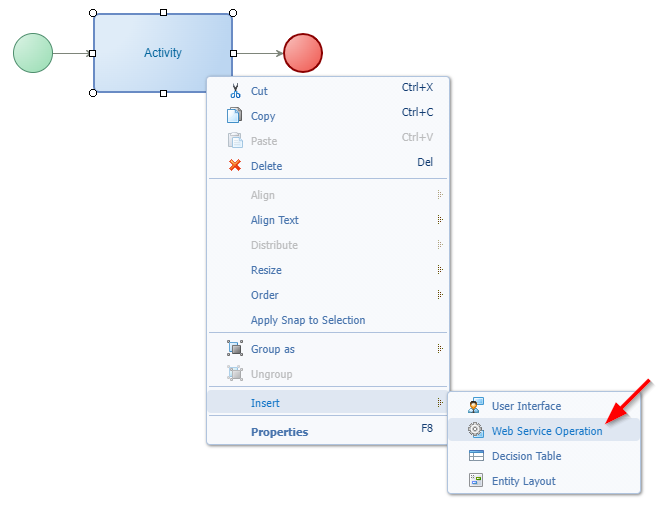 Save it, publish it, and do a first run by hitting <F12> in the BPM modeler panel. Use the PIM to find out if it all runs fine by double-checking the message map of the BPM instance:

Fine, shutdown our external service and try that action again and see we and up in an “Aborted” state: 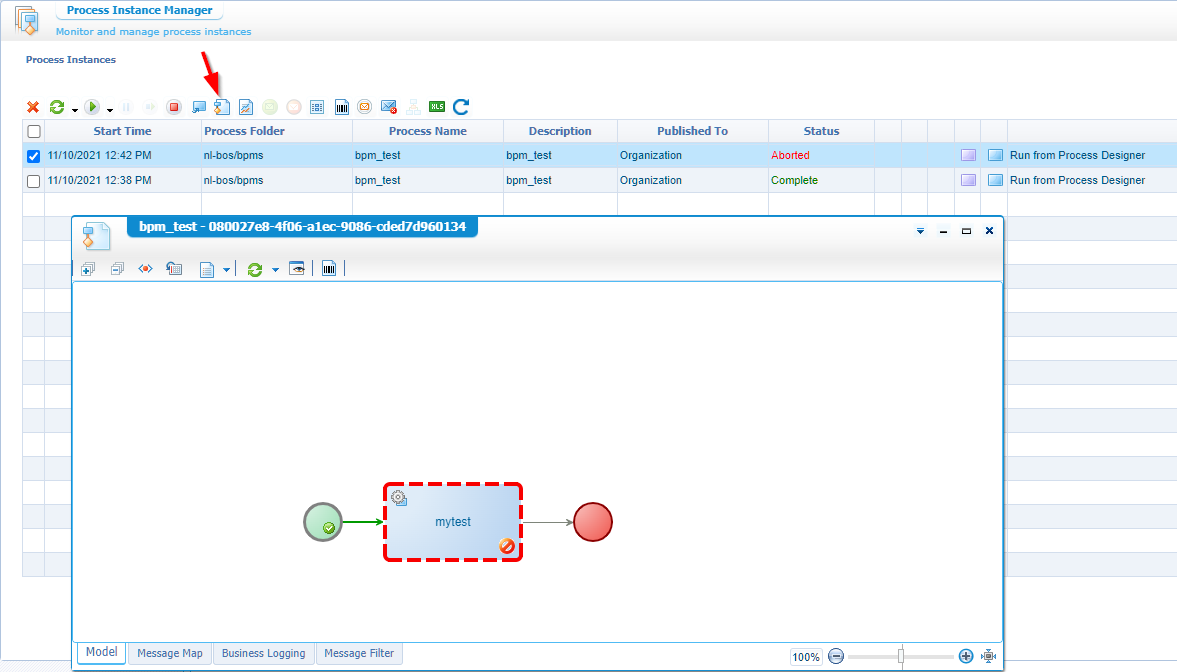 How to continue from here? For this we first start our external service again and do a ‘Restart’ action on our BPM:

We get a new modal popup with an option to restart from an activity:

Hit the ‘Start’ button and see (in the PIM) our completed process again! Nice work and as expected, but wouldn’t it be nicer to have a bit more flexibility? What if we call this flow twenty-five times per minute, and your service starts to fail for any reason? 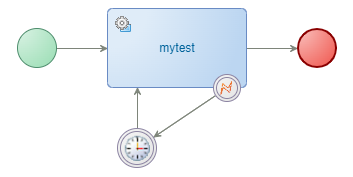 Here we’re catching the failed webservice call with a 15 sec. ‘Delay’ construct. So, we fail, we wait 15 sec., and we try again! In the PIM this will look like this (we stop the external service, start the BPM, wait a while, and start external service again): 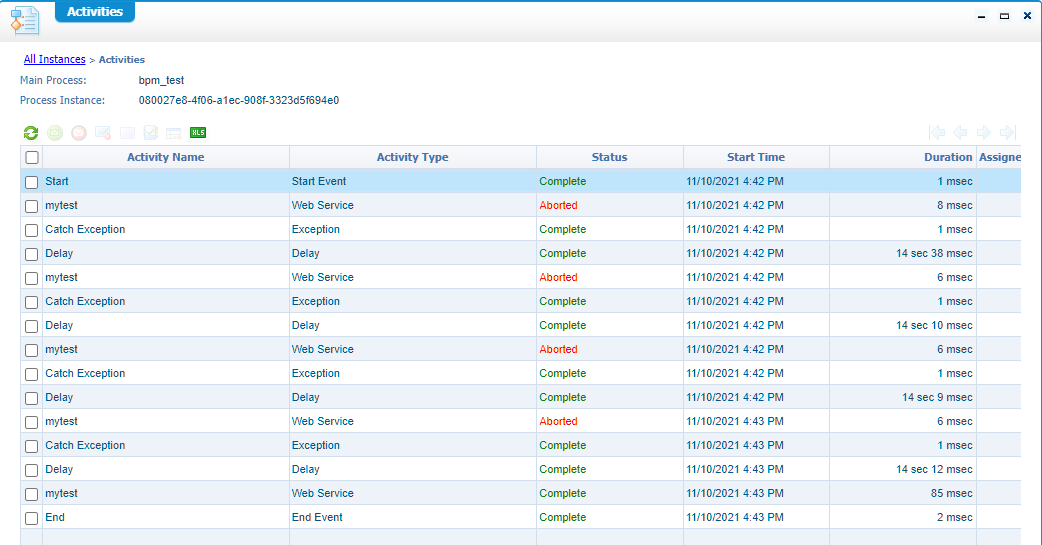 Now all this happens in the week-end, because we have a scheduled BPM trigger each Saturday morning. We were not notified about the fact the external service gets an update that same Saturday and will be unavailable till Monday morning!? Yes, my friends…start crying! 😭 I hope you have a day off that next Monday morning!

Time to create a ‘try-10-times’ feature and the fallback scenario…The BPM would look like this: 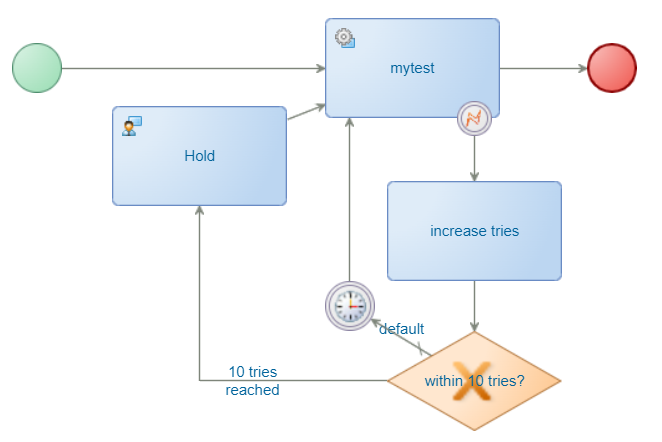 Well, where are we waiting for…Save it, publish it, have a run, and monitor the PIM! I get green flags all over the place! Hooray! 🎉

Can we make it nicer? How about a configurable duration and configurable number of tries? Oeoeoeoeo…Now we’re getting somewhere!

Make it all configurable

For this we first need to add two configurable elements somewhere globally for our solution. A notable feature for this in the underestimated ‘Application configuration’ feature on project level: 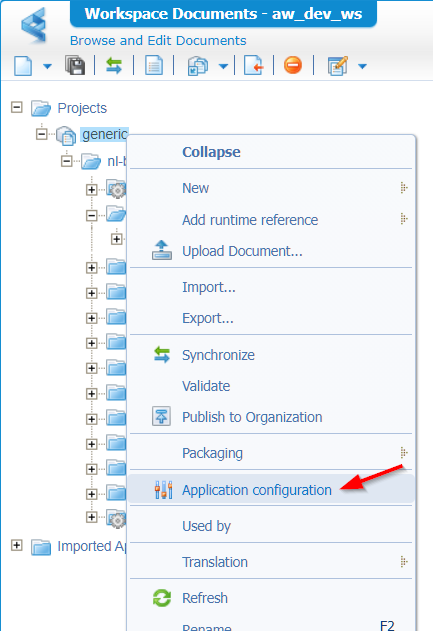 Hit it like a pro as see the magic happening! It’s just an entity…with Building Blocks! How nice…Let’s create two properties and generate all the rest: 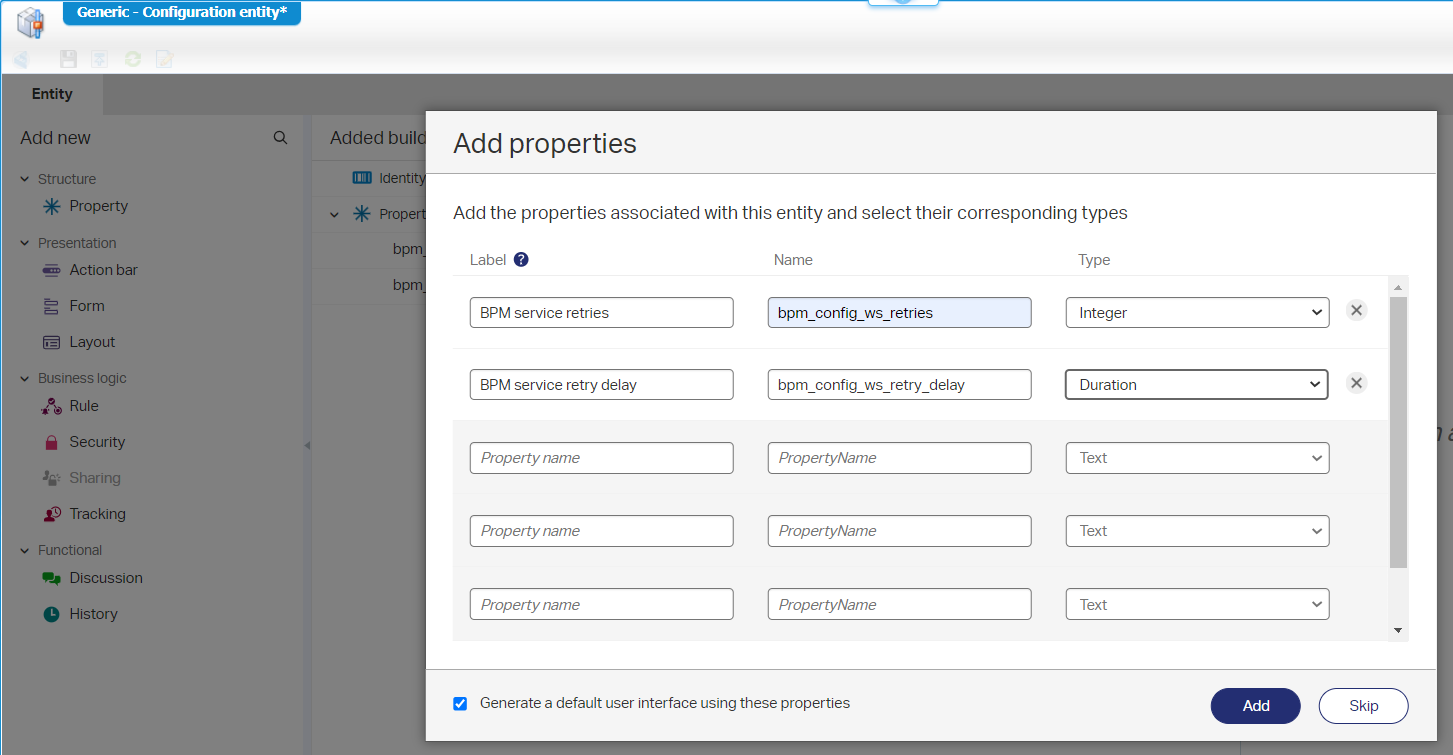 We choose The ‘Duration’ type wisely! Later on we’ll discover the BPM ‘Time-Out’ construct requires a certain input type! This should be an XSD date/time value which will have a value pattern like this: PnYnMnDTnHnMnS with a simple value of PT10S which represents a “period of 10 sec.”. Have a look at this site in the section ‘Duration Data Type’.

Save it directly and also publish it as we won’t change anything else for now (I guess!?). Time to set the values, and for this we need to dive into the ‘/app/admin/‘ part of the platform where we can start configuring our solution!

Hmmm…that’s an error I get:

After a save, and a publication, we should be fine again in ‘/app/admin’: 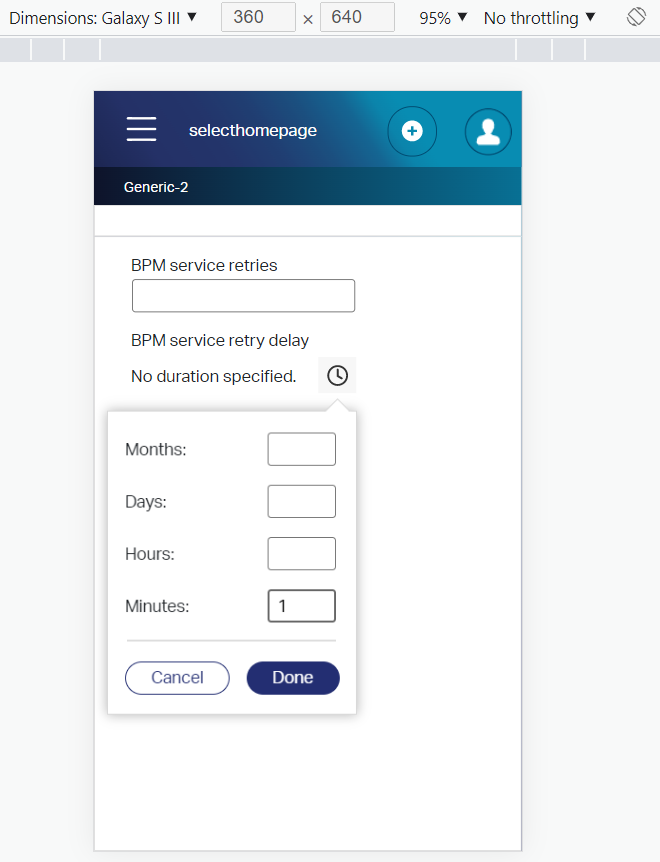 Yes, even the admin-time is responsive! 😉

Time to read them from the BPM! For this we’ll use a read-webservice, but after research I conclude there is no webservice at all! Not OOTB from the platform (SOAP or ReST), and also no ‘Webservices’ BB on our crafted configuration entity! What we do know after all the posting and sharing is the understanding of the back-end database where eventually our values will be saved in a table called (in my case) o2appworkstipsgenericgeneric. What can we do with this wisdom? Well, remember the post about the ‘Northwind’ database!? The one where we use the “WS-AppServer service container” to extract webservices from database tables!?!? Let’s do it again…This time for our config entity table!! 🤗

Ok, I assume at this moment you have the AppWorksMetadataWSOps operation available with a valid response like this: 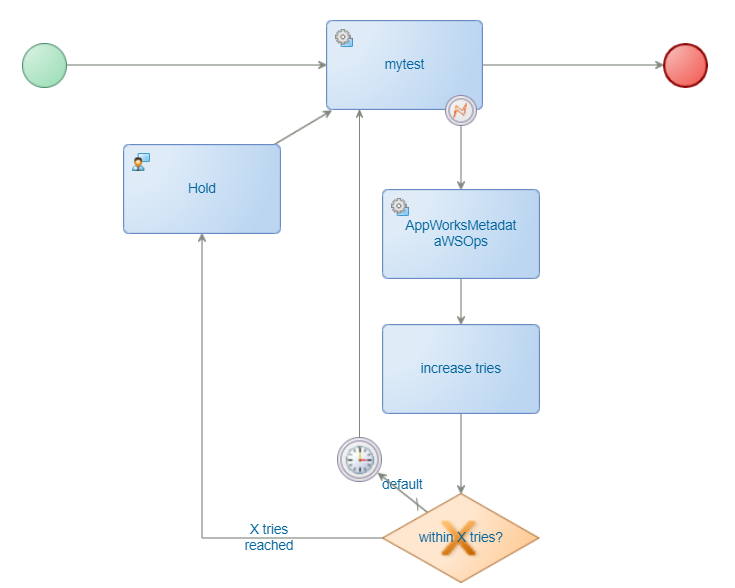 Time to deploy and evaluate our solution! For me it’s a green flag…✅

!!BE CAREFULLY AS IT’S NOT RECOMMENDED UPDATING DATABASE INFORMATION THIS WAY!!

Now, let’s have a look with our HeidiSQL tool in the database table and do an update statement like this: UPDATE o2appworkstipsgenericgeneric set bpm_config_ws_retry_delay = 'PT10S' WHERE id = 2;

After the update, we can test our BPM again…For me this runs like a charm! 😉 But what about “one second” via PT1S!!?? Great question!…I tried it out, but it starts to give errors in the platform logging: Exception while creating the schedule Start date should be greater than current time. with a “Running” BPM-state as result…Too bad! Looks like 10 sec. is the minimal value!

I also found this forum post about a same issue on the Time-Out construct. So, we’re not alone! 👽

That’s it…Boy, did we learn valuable information again! It’s a timed-out “DONE” where we took a look on how to manage an unreachable webservice from a BPM standpoint of view. Interesting stuff to play around with, and you also see, I figure stuff out during the writing of my blog post. I was not aware of the ‘Duration’ part of the configuration check. That’s the same for the missing webservice parts but looks like we’re getting smart enough to build our own workaround this time…Hooray! Time for a beer, have a great week-end, and I CU next week with another great post.

Don’t forget to subscribe to get updates on the activities happening on this site. Have you noticed the quiz where you find out if you are also “The AppWorks guy”?

Subscription for this site will get you notified on new posts and updates on activities.

Feedback or any question

Send back any feedback or question so we can inspect and adapt our features or help you on your own journey.

Check your mail inbox in the next 5-10 minutes for more information on your request.

AppWorks Tips
—
Managing an unavailable (external) webservice in a BPM